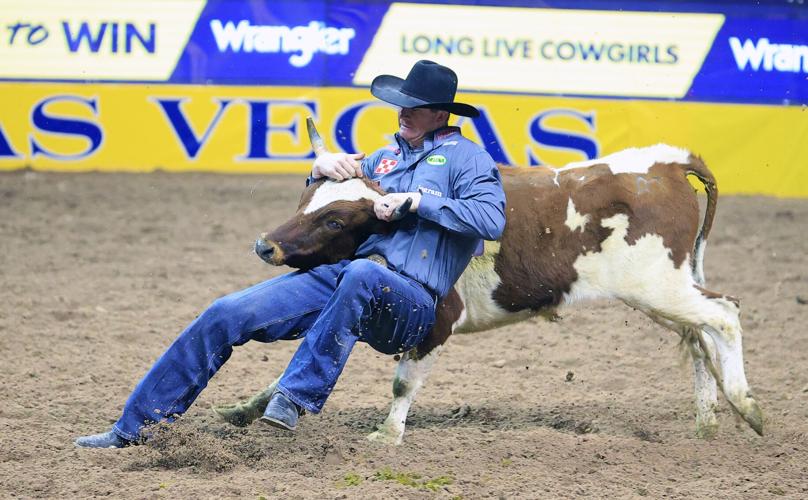 Two nights after finishing first in the steer wrestling competition, the Helena resident fashioned a time of 3.7 seconds to win another buckle Wednesday night during the seventh go-round of the Wrangler National Finals Rodeo at the Thomas & Mack Center.

Erickson, a Montana State alum, is competing in his seventh WNFR after a two-year absence.

Also having a strong night was Billings header Clay Tryan, who teamed with heeler Jade Corkill of Blackfoot to finish second in team roping with a time of 4.0 seconds. The duo won $22,851.

In other action involving Montanans:

• Melstone’s Sage Newman, who’s first in the world standings, was 11th with a 71.5. He remained ahead of Stetson Wright of Milford, Utah, who clinched the all-around world title Wednesday, by roughly $38,000.

• After a memorable five-day run where she finished no worse than fourth, Montana native Lisa Lockhart was 13th with an 18.57 in barrel racing.

• In the steer wrestling competition, MSU grad Jesse Brown had a time of 5.9 seconds and Helena’s Timmy Sparing had an 8.4. Both finished out of the money.

• Former tie-down roping champion Haven Meged of Miles City had a time of 18.7 seconds and finished out of the money in eighth.

• Daniel’s Tanner Butner scored 76 and finished ninth in the saddle bronc competition. Hillsdale’s Brody Cress was next with a 74.